From Timeless Productions by David Blonski

Imagine there are two worlds, and for some there is the knowing of many more, though for now just an imagination of two worlds will do. One of these worlds we often find our self in and the other a place we know exists. Some may long for it, some might deny it and some just might make it up differently each day. For some it might be seen as the reality of the border of the labyrinth or the path.

Be great in your imagination and consider the way in which we live, are we some days taking the journey of the border or is it indeed of the path? Reason to question this is in how we might know our daily reality. Maybe it is just a day and then it might be months or years of seeing the world in a specific way. Awakening daily to a world of trials or a world of triumph. We can all speak about this with much more ease than actually living it. That is until we begin to walk in the world as if we had a choice and a conscious awareness of how we carried ourselves and what we believed about our current existence. 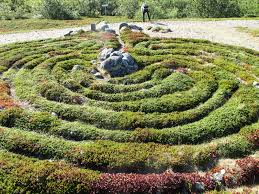 This thought occurred on the labyrinth today about the steps taken and are they in the consciousness of abundance or scarcity? From a deeper perspective if one were to not only think it, but go to a place of believing it they might return to the childhood state where anything seemed possible. In the imagination of childhood one returns to a place of simplicity where the world is as big as they can imagine it to be. In that world the eyes grow bigger and brighter and the body begins to hum with an exciting vibration and manifestation becomes easy.

Of course we could walk with the woe we know and be immersed in figuring out the day ahead or behind us solving it like a puzzle where the piece has to fit and logic must rule the way. Life of course presents us with choices and it occurs that IF we were to consider that each day we walk the path, that it might indeed be the border or what if it were flipped and we walked the side seldom seen?

And at the end of the day, we did not dismiss the wild eyed wonder of imagination, yet returned to it the next day. What if….

The idea behind forgiveness is to give as we have before we encountered a scenario that made us either become the object of dissatisfaction with ourselves or another. In this month of Return, the concept of forgiveness is but one way to return.

As there has been little posting in this month so far, a forgiveness is sought for the readers who look forward to hearing news and reflecting on the daily path. To return to the path of more regular communication, the simplicity is to pick up the proverbial pen and write. Though with multitudinous changes occurring simultaneously indulgence is also sought. It is a time to return to what is basic and what is true and from that will return a more regular even keel in which to enjoy the musings that come from the path daily.

So as the journey of change is underway, the many occurrences and synchronous events that are happening on a personal level from this writer’s perspective, it is most likely occurring on the path of others like yourself as well. The events are becoming interesting and a great message when it all seems to feel as if an overwhelming surge, is to return again to what is true and right.

Zion Congregation labyrinth in Minnesota” class /> Zion Lutheran Church Labyrinth, MN[/caption]Such is the nature of change to teach us many things, as adversity builds are character and countenance, we evolve. As we move forward in this evolution we also can realize that it comes full circle like our walk on this unicursal path, we return to where we began only richer for have taken the road.

There is a book called the Forgiveness Labyrinth and a quote that resonates is “The only way out of the labyrinth of suffering… is to forgive.” David Greene

Today is the anniversary of the Andy Griffith Show which began back in 1960 and Father Knows Best aired it’s first show on this day in 1954. It’s also the birthday of James Herriot, author of All Creatures Great and Small and All Things Bright and Beautiful.

These are remembrances that have feelings that can return us to a time long ago when we recognized the slow and easy pace of things, Where family mattered and we held a certain satisfaction in knowing that some things stayed the same and didn’t hurry us through out life without a care in the living of it.

In a month that asks us to return, it is of these things that we can choose to reflect upon or in the manner of how it feels as we return our steps, reflecting upon our time on a particular journey. Close your eyes in the center, breathe in and grant yourself a moment to feel what times of comfort or better still, satisfaction felt like.

Then make your return and note the opportunity to enjoy feeling, rather than thinking a memory.

Return is the focus for the month of October. We begin a new month crisp in mid autumn, the month reminds us of the seasons of change as the trees turn color and begin to lose their dressings of the year. It is a return in feeling as the weather changes to a cooler atmosphere in the Northern Hemisphere.

It is a return as we are reminded of now settling into the school year of our youth. The newness of September has faded and we are reminded of a return to the habits of the indoors as the cooler weather approaches. We begin a new yet are once more reminded to return to our habits with a fresh new appeal to perhaps do them differently and with more purpose. It isn’t the time to feel the fresh clean slate, rather the time that reflect upon what we have done with it and how we might want to return to it with significance.

Whatever you may have begun in this year, now is the time to fall back on those last reflections and make the final changes before the year comes to a close. Use the season well and return to what is important so that what comes is basic and true.

Consider in this month a great many feelings of return as a reflection with action and like the steps we take each day inward and centering, allow this final return to leave those foosteps coming off the labyrinth with greater purpose and enjoyable zeal.

“Sometimes you have to face your past not to continue what you left off, but to simply make you realize how happy and satisfied you are in the present.”
Author Unknown

Image of Grace Cathedral Labyrinth by the San Francisco Gate